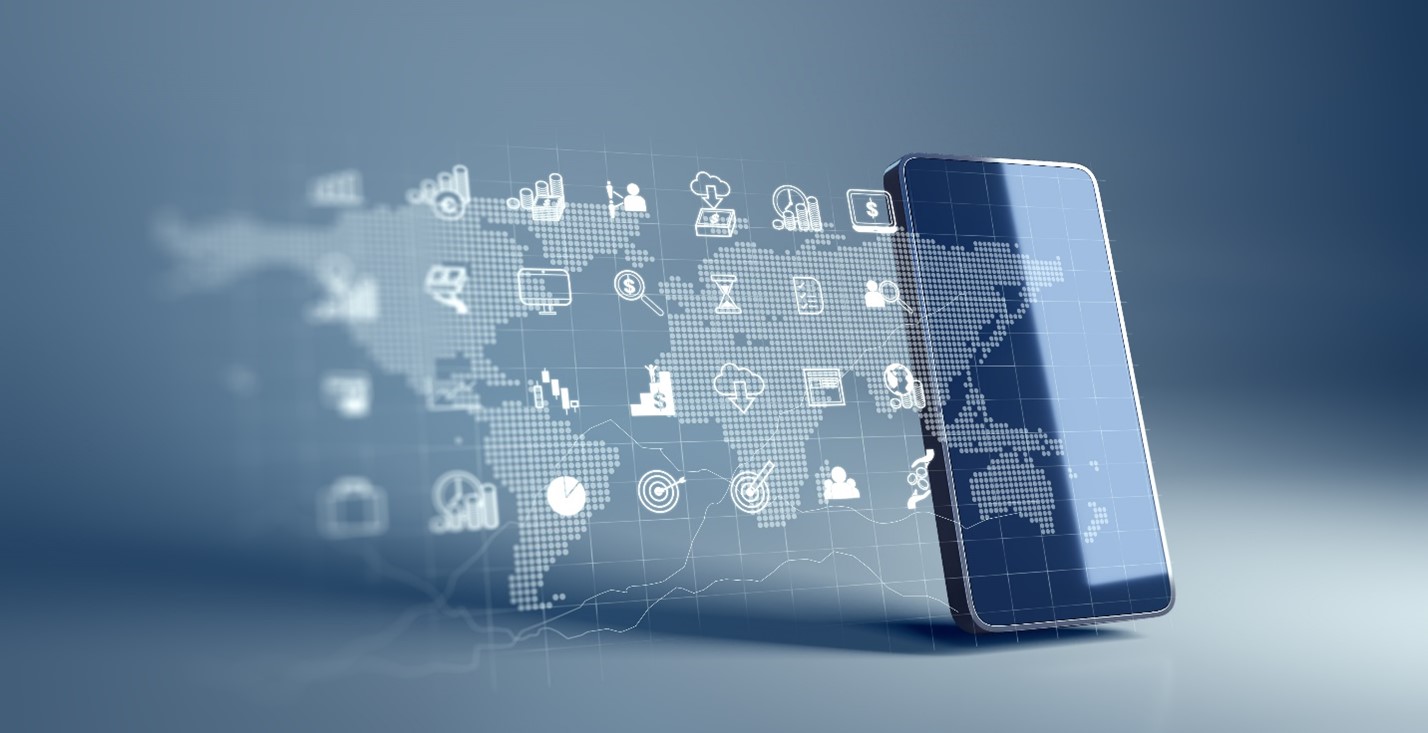 Internet governance (IG) is the development and application of shared principles, norms, rules, decision-making procedures, and programs that shape the evolution and usage of the Internet. It is the design and maintenance of global Internet architecture, bothering on areas including infrastructure and standardization, legal, cybersecurity, development, economic, sociocultural, and human rights issues. It is now an active topic of international discussion, in this age of emerging technologies such as artificial intelligence and machine learning.

Interest has been fueled by media attention to cybercrime, global surveillance, commercial espionage, cyberattacks, and threats to critical national infrastructures. It is also the development and application by governments, the private sector, and civil society, in their respective roles, of shared principles, norms, rules, decision-making procedures, and programs that shape the evolution and usage of the Internet.

The Internet in today’s world is growing faster than expected such that the governance of the Internet has become an important subject of study. Internet governance affects various critical issues, such as open access, freedom of expression, innovation and new applications, commerce, development, and security. The greater part of conversations on Internet governance is often dictated by geopolitical issues and has been within the levels of politicians, political analysts, and other stakeholders. With the perceived dominance of the developed nations in such discussions, developing countries have realized the essence to exercise control over the Internet within their countries. All these issues make Internet governance a potentially important area of study for Information Systems researchers and academics.

Regulating the Internet has always been a controversial matter. Its original designers kept its operational design open and free, conceiving it as an open communication system that would enable academics to collaborate and exchange ideas and information without being tied to organizational and hierarchical constraints (Leiner et al., 2003). Thus, the Internet was designed as a highly redundant and inter-connected network of networks in which data communications would not be completely disrupted even if parts of the network were to go down. A disruption in any part of the network would cause data packets to simply take alternate routes to reach their destinations. The Internet saw rapid growth in the 1990s, with the invention of protocols such as HTTP, the world-wide-web (www) platform, and the graphical web browser. These advancements enabled anybody who had Internet access to connect to the web.

The Internet then became a tool for unregulated expression, communication, entertainment, and trade. Over the period, governments have found various reasons to control and regulate the Internet. It has become necessary for more stakeholders, especially from the African region, to have greater say in the global management of the Internet. Some argue that since the Internet is a global public good, its management, governance, and regulation should not rest in the hands of a few administrators who often represented developed countries. They oppose that Internet governance should only be in the hands of those countries that originally built the Internet infrastructure. These views, as we see today, have affected the Internet and its future of communications, commerce, free expression, and national security. Recently, some of the emerging economies have also raised their stakes in Internet governance, partly out of concern that not doing so will affect their own economic and social well-being in the future through a form of digital colonization.

This promotes better decision making by ensuring that the views of the key actors concerned about a particular decision are heard and integrated at all stages through dialogue and consensus-building; create trust between the actors and solutions that provide mutual benefits, using people-centered approach and everyone involved takes responsibility for the outcome, giving stakeholders a greater sense of ownership for decisions made.

Who then are the Stakeholders of Internet Governance?

The technical community includes institutions such as the Internet Society (ISOC), and individuals who have developed and promoted the Internet since its inception, created the initial spirit of the Internet, based on the principles of sharing resources, open access; have cumulative experience in creating, improving, deploying, and managing the Internet in almost all countries in the world, under a wide variety of legal, administrative, and regulatory governments.

Academic Institutions and values in the debates about the future of Internet Governance have played a key role in the development of the Internet and in its operation and in what we call today “governance,” especially at the logical layer comprising technical standards and protocols. Similarly, core academic values such as openness, collaboration, and trust have inspired the early approaches and initial modes of Internet governance and have shaped its evolution since the 1990s–Internet Monitor, 2015.

Civil society has been the most vocal and active promoter of a multi-stakeholder approach to IG. They represent interest, provide expert voices, influence the regulation and self-regulation of the Internet with actions such as shaping the public agenda through campaigns and getting involved in political decision-making processes.

Governments have had to simultaneously train officials, develop policy, and actively take part in various international Internet meetings. In addition, governments are represented on the advisory bodies of organizations such as ICANN (Internet Corporation for Assigned Names and Numbers) and on the IGF (Internet Governance Forum). ICANN represents the global public Internet Community, with its mission to help ensure a stable, secure, and unified global Internet.

The concerns of the private business sector are the protection of trademarks and business constituencies. Businesses help shape the Internet and its rules in many areas, hence, have the responsibility to accept standards. Domain-name companies (Registrars and registries who sell Internet domain names), for example, have also been involved in the broader IG policy process with the main aim of reducing the risk of a potential takeover of ICANN’s role by intergovernmental organizations. Internet Service Providers (ISPs), also as online intermediaries and gatekeepers on the internet, remain important for Internet governance. Their involvement is on a national level in dealing with government and legal authorities. For a developing nation like Ghana, telecommunications play a critical role in our digital growth. Telecommunication companies facilitate Internet traffic and run the Internet infrastructure. The key actors include companies such as MTN, AirtelTigo, Vodafone. Their primary interest in IG is to ensure a business-friendly global environment for the development of an Internet telecommunication infrastructure. Internet content companies such as Google, Facebook, and Twitter are also increasingly active in IG. Their core business model could be directly affected, for example, by government arrangements related to data protection and privacy. As content producers, their dominance of products and models for local content development raises concerns for protection and copyrights globally. Note that any company that depends on the Internet has a stake in the work of ICANN. 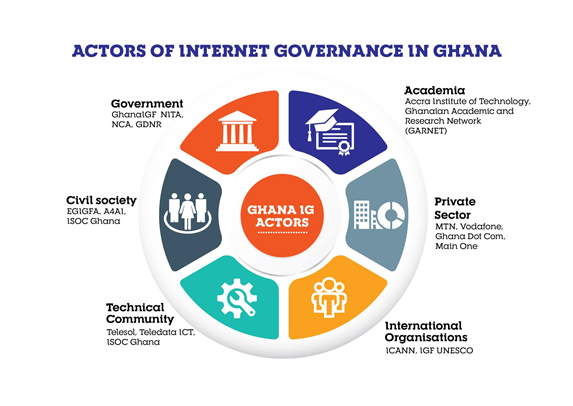 Source: GhanaSIG2021. This image shows some examples of actors of Internet governance in Ghana.

Internet governance is a very political issue charged with a variety of international key issues. Currently, many countries in the developing world, including Ghana and Nigeria, have active committees working on Internet Governance. As others believe that a more decentralized organization from the only currently working structure specifically created for Internet governance—ICANN, should be derived, questions and issues pertaining to Internet governance have assumed greater significance.

Thus, there are intergovernmental and multi-stakeholder models of Internet governance that exist presently where the ICANN is a completely independent body with no supervision from any government or UN Agency. While the Internet design and operations have been conceived, implemented, and maintained by the ICANN (with the ISOC and IETF- Internet Engineering Task Force as advisory participants), the important physical layer of networks is still under the purview of the International Telecommunications Union (ITU), which is the custodian of International Telecommunications Regulations (ITRs).

Unleash Spectrum Potential to Pave the Way to a Digital Ghana

Technology For The Non-Technical