Technology education and skills development should not be the preserve of the affluent in our society, it must be democratized and accessible by all. This is because emerging technology skills are now essential tools for employment in the 21st century and in the next decade may become a requirement for any type of job. In order to prepare the next generation and equip them with the skills needed to fit into the demands of the future, IT Consortium, one of Africa’s leading financial services technology solutions provider celebrating its 20th anniversary this year joined forces with the Institute of ICT Professionals Ghana (IIPGH) to launch The Coding Caravan (TCC).

The first phase of the technology skills awareness program was carried out in August, where over 250 young people in Accra and Ho were introduced to coding (computer programming), 3D designs, and 3D printing.

The Coding Caravan was carried out as workshops where laptops and coding software were made available for students to learn. Instructors from IIPGH and staff of IT Consortium supported the children to code. For some of these kids, it was their first coding experience. Most of them were surprised they could put together codes in sequential order and produce meaningful outcomes.

Why the Coding Caravan?

Ghana’s population is youthful with approximately 57% of nearly 30million of the population being below 25years according to the Ghana Demographics Profile published by indexmundi.com. This youthful population can become a huge human resource asset to Ghana, Africa, and the world at large if skills development training, particularly in the technology-related fields, are introduced early in their formative years before they are out of school. 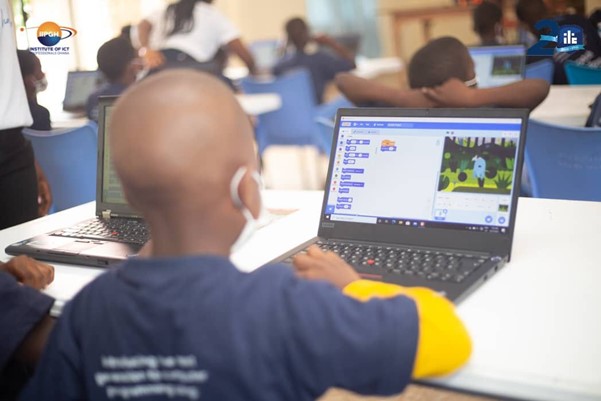 The world is racing at a faster rate and is constantly in need of innovators that can use technology to come out with the next big product that will bring efficiency and enable business growth. Areas such as Artificial Intelligence (AI), Internet of Things (IoT), Software Engineering, Robotics, Application Development, Virtual Reality (VR), and Augmented Reality (AR) are some of the emerging technology areas that will be in demand by 2030 according to World Economic Forum report 2020.

The Institute of ICT Professionals Ghana (IIPGH) being a professional association of technology experts, is driving an emerging technology-focused capacity-building program to prepare the next generation for these new job requirements. In order to achieve this objective, IIPGH launched the coding for kids program 3years ago and expanded the training program to cover all levels (children, the youth, and adults/professionals). The practical skills development program quickly expanded to all parts of the country, with over 10,000 students already trained in different coding programs and other IT-related skills training. However, there are still so many people to be trained. To extend coding and other ICT skills development programs to more students, particularly children from underserved or deprived communities, IIPGH collaborated with IT Consortium to run the coding caravan in 4 communities during the month of August 2021. IT Consortium has been involved in the skills development of young graduates as part of efforts to grow tech skills in Ghana and across Africa.

However, this year as the organization celebrates its 20th anniversary, management and staff want to go beyond training graduates to training kids in communities. The organization believes that its staff who are working in the technology space will serve as champions and role models that will positively influence young people, especially girls, to embrace technology skills development programs such as coding.

Every child needs to be introduced to coding as it is being touted as the skill of the future. However, limited resources will hinder a nationwide first-time deployment of the project. The partners, therefore, agreed the first phase will target three (3) communities in Accra and one (1) community outside the capital. After an online advertisement for parents to register their kids and arrangement of children from underserved communities in Tema Newtown, on 7th August 2021, over 50 students converged at the Digital Design and Creative Coding Hub of the Institute of ICT Professionals Ghana (Oksart Place, Kwame Nkrumah Circle). At the Hub, laptops were made available to each child present as they were guided in an intensive but fun learning environment.

The volunteers (staff of ITC) and tutors from IIPGH gave the children a memorable experience of designing things in 3D using the interactive smartboard and the portable 3D printers. The interactive session gave the children the opportunity to ask questions on Code-it and Tinkertoys (some of the new software used during the coding lessons). They were also fascinated by the 3D printer and were very curious to know more about its functionality. The children were given some of the objects designed and printed. At the end of the program, the children were served with packed lunch and drinks. The first workshop ended with smiles on the faces of all participants and all COVID-19 protocols were observed.

The Coding Caravan was designed in a way that every week, the team will organize a workshop in a community. This will afford the volunteers who dedicate a day out of the week to help young people without impacting too much on their already busy work schedules. The second stop took place at the Shield International School in Adenta on the 13th of August 2021. The setup in the Adenta community was unique. Although the team selected a good private school to host the workshop, the event was held on a day when the students were not in school. Rather, children were randomly invited, particularly from the deprived communities where most of them attend public schools. Other students were also selected from public JHS in Madina to participate in the workshop.

The experience was the same as the first stop, however; it was observed that some children who were randomly called from the street and communities struggled to use the computer. Some admitted it was their first time using the computer and following coding instructions was a bit difficult. However, at the end of the program, the students were happy about the concept and were yearning to learn more.

In every community, the organizers of TCC strived to give equal opportunity to students in privileged private schools and public schools. A quota system was adopted where some children from the community and others from public schools will join the students at the school hosting the workshop. The Dansoman workshop had all these three (3) groups fully represented and a successful program was carried out in Alpha Beta Educational Centre, Dansoman, on 20th August 2021.

Management of the school and the tutors were actively involved in the entire preparation and the organization of the coding workshop. The students were enthusiastic about the new things they were being introduced to, and the workshop was very interactive. Students from Dansoman Basil II JHS were very active and could follow all the steps. The workshop ended as one of the best organized coding programs.

After three (3) stops in Accra, TCC embarked on a trip to Ho, Volta Regional capital, to engage students in the Ho Municipality. With the help of Genius IT Foundation, the local partner of IIPGH, Ho-Dome RC Primary/JHS School Complex was identified as a suitable host for the coding workshop on the 27th of August. The headmaster of the school was actively involved in organizing the venue for the program and ensured maximum participation of the students. As was done at previous workshops, information was put out inviting the public to bring children to participate in the workshop. There was an overwhelming response, with over 120 students participating in the workshop. To serve all the children, the training was conducted in batches. The first batch comprised younger children, having their workshop in the morning while the older ones had their turn in the afternoon.

The first phase of the coding caravan has been successful with coding and other technology skills programs introduced to over 250 children/young people in Accra and Ho. The reception was great, and the children embraced the concept. While this is a good indication that all other communities in Ghana will need such awareness programs, it requires collaboration with more stakeholders. To achieve this bigger objective, the Institute of ICT Professionals Ghana and its partners are inviting corporate institutions, civil society organizations, and government agencies to team up for more roadshows and awareness programs in communities to drive the message of ICT practical skills development for young people. The future can be bright if we make a conscious effort in preparing our young ones.

Unleash Spectrum Potential to Pave the Way to a Digital Ghana

The importance of quality in software – 1