As an Information Security Professional, I have taken a keen interest and followed closely the global reports of the Unisys Security Index (USI), for the past 4 years. Findings from the past few years have been very intriguing and insightful. The USI researches into the most critical security issues faced by people around the world (excluding African countries). It does so by asking respondents in online surveys to indicate their level of concern about 8 different security threats. The 8 security threats are bankcard fraud, disaster/epidemic, financial obligations, identity theft, national security, online transactions, personal safety, and viruses/hacking.

With the level of consistency in the findings of the past 4 reports, I have always been pondering whether the findings can be generalized: especially in the case of Africa and Ghana in particular. In order to answer this question, I was highly motivated to conduct similar research in Ghana, termed: The Sherrif Security Indicator (TSSI). Thus, TSSI is the Ghana version of the USI.

The maiden version of the TSSI (v.1.20) was conducted via an online survey. The survey was designed with Microsoft forms and shared with persons resident in Ghana via WhatsApp.

Out of the over 1,000 persons targeted for this study, 256 responses were received. The respondents were asked, “which of the 8 under-listed factors poses the greatest danger or harm to you?” The factors were bankcard fraud, disaster/epidemic, identity theft, inability to meet financial obligations, national security, online transaction fraud, personal safety, and malware/hacking.

The result from the survey was automatically analysed by Microsoft forms.

It must be noted that, contrary to USI, no demographic data were collected as part of this study.

Out of the 256  respondents, majority of them indicated that bankcard fraud and personal safety were of extreme importance to them. Bankcard fraud and personal safety were ranked 1st and 2nd respectively. The respondents were least concerned about online transaction fraud and malware/hacking; which were ranked 7th and 8th respectively. Figure 1 shows the detailed findings. It must be noted that, the details in figure 1 concentrate on the responses that pose the greatest danger to the respondents. 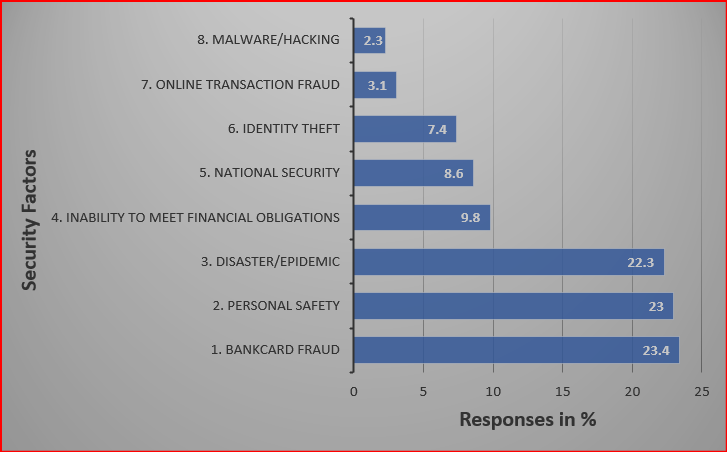 Although numerous analysis can be drawn from the findings; especially in juxtaposition with the USI, this article concentrates on a few of them.

The findings indicate that bankcard fraud and personal safety pose the greatest threats to the majority of the respondents, whilst malware/hacking and online transaction fraud are of least concern to the respondents. The respondent’s view on identity theft is in sharp contrast with all the findings of USI. Identity theft has been topping the USI findings for 4 consecutive years but finds itself in the 6th position in TSSI.

The vast disparity between the top 2 and the last 2 factors clearly demonstrates the magnitude of the respondents’ concerns.

The views of persons resident in Ghana on the 8 security threats are at variance with all the USI findings. The influence of COVID-19 on the TSSI findings may not be significant.

As majority of the respondents regard bankcard fraud as the greatest security threat to them, financial institutions need to ensure the security of payment cards. This can be achieved by conducting continuous awareness for customers, and implementing the Payment Card Industry Data Security Standard (PCI DSS); in line with the Bank of Ghana Cyber and Information Security Directive.

My sincere appreciation goes to all the respondents in TSSI, and Unisys Corporation for its consistent effort in sharing knowledge with the world through the USI.

Importance of Packaging in the E-Commerce Business

Be Cyber Smart: The Way Out